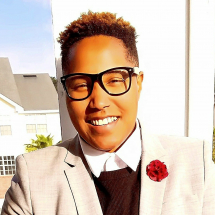 At the tender age of 3, Amber received introduction to performing in her father’s church. She credits much of her musical influence to her parents, of whom she heard writing and playing music throughout her home. A product of Seminole County’s Rock Lake Middle and Lake Brantley High School, Amber received 8 consecutive “Superior” and “Superior-with Distinction” awards at the FBA Solo and Ensemble festivals.

Amber holds a Bachelor’s degree in Music Production and Technology from the University of North Florida, where she studied with world renowned artists Daniel Gottlieb, Charlotte Mabrey, and Andrea Venet. As an Osprey, she held lead percussion chairs on the Florida Ambassador of Music European tour, the UNF Concert Band, and UNF Jazz Ensemble III., and taught local students K-12 during her summer school sessions. Upon graduation, Robinson aided in tour production for the inaugural NYO China tour, with performances held in Carnegie Hall, Beijing, Suzhou and Shanghai. In December 2020, she performed in Italy with JP and the Soul Voices (keyboardist/arranger) for the 2020 JP & TSV Gospel tour.

Since her return to the U.S., Robinson now provides private instruction, performs as a live musician for Skillzmatic Entertainment Inc., EPCOT (Hawkmoon Entertainment), has served as the musical director for the release concert of Emorja Roberson’s second live album, “The Evening Musicale”, produces music for independent film and television, and ministers weekly as a musician for Saint Mark AME Church-East Campus.

“My goal is to encourage students to chase after their wildest dreams and equip them with the tools to do so!”