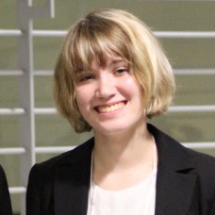 Amanda began her music education at the age of 4. Part of a musical family, music and performance have always been a part of her life and she loves to help pass that on to the next generation of musicians. Amanda specializes in voice, piano, and violin and works on learning new skills any chance she gets. Amanda’s continued studies brought her to the University of Central Florida. Vocal performance classes as well as being apart of local Orchestral groups has helped in continuing her knowledge in music theory and performance skills. Private lessons of her own were provided to help hone her individual skills on the violin and piano. She continues to study music and performance skills through conventions and university.

Amanda’s performance career has included performances throughout the state of Florida. She has performed with national and international choirs as well as state orchestral groups. Notable performances have been at Carnegie Hall with a national choral group. Amanda also performed with a national orchestral group in the Kennedy Center of Washington D.C. She has been given the honor of performing in international locations such as Shanghai.

Amanda believes in a strong musical theory foundation to work up from. She enjoys teaching difficult skills in a diverse way that allows each individual student to hone their skill in a more personal way. A firm understanding of how music works will then allow for the student to have more fun when they perform and form into a musician. Amanda believes that each student should find their own meaning in music and work from that definition.

Amanda enjoys having fun with a student and letting them really understand the joys of music. Besides the important aspect of practicing, Amanda enjoys soccer, reading, and good food, as well as an occasional debate about science.