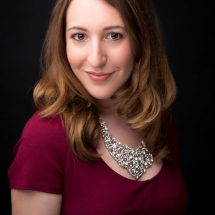 Soprano Amanda Levy is a recent graduate of the University of Houston Moores School of Music, where she received her Masters Degree in Vocal Performance. While a student at the university, she had the opportunity to portray the roles of Juliette (Romeo et Juliette), Suzel (L'amico Fritz), Princess Ninetta (The Love for Three Oranges), and Martha Sheldon (The Crucible) under the tutelage of mezzo-soprano Melanie Sonnenberg.

For this upcoming season, Amanda will participate as the inaugural Ana María Martinez Emerging Artist at Opera in the Heights in Houston, playing Kate Pinkerton in an English/Japanese version of Madama Butterfly, covering some of the major roles this season including Marie in La fille du régiment and Fiordiligi in Così fan tutte, participating in children's operas, outreach performances, and masterclasses, as well as the choruses in the mainstage operas

Ms. Levy, a Long Island native, graduated from the New England Conservatory of Music with her Bachelor of Music in Vocal Performance, studying with soprano Lisa Saffer. She participated the conservatory's Undergraduate Opera Studio production of Dido and Aeneas, singing the title female role, as well as in the ensemble of Die Fledermaus. In addition, she frequently performed with ensembles such as the NEC Chamber Singers and Concert Choir. Amanda is an advocate for new works, premiering the role of Willow Summers The Summers Case by Sonnet Swire, as well as other premieres.

Last summer, Amanda participated as an Apprentice Artist at Opera in the Ozarks where she sang the roles of La Contessa (Le nozze di Figaro) and Mrs. Gleaton (Susannah). She has performed in venues across the United States and Europe, participating in programs such as Opera in the Ozarks, Le chiavi di bel canto, Manhattan Opera Studio, AIMS in Graz, and the Manhattan School of Music Summer Voice Festival.

Besides classical voice, Ms. Levy has a passion for musical theatre and the flute, both of which she discovered at a young age. She has performed in countless community theatre productions, recitals, and concerts throughout the Long Island metro area and was fortunate to have participated in New York State School Music Association All-State program for two years. Amanda is looking forward to sharing her love for music with her students!