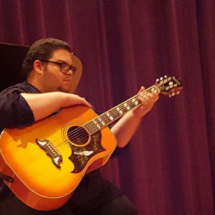 Born and Raised in Central Florida, Allen Koo'ken studied at Seminole State College of Florida in pursuit of music performance degree. Currently attending Rollins College, where he has broadened his horizons with the study of ethnomusicology, particularly in American genres and art forms. He has studied extensively with Steve Luciano, and most currently Bobby Koelble. Knowledgeable in a multitude of
styles in the jazz realm including: swing, latin, boss nova, bebop, and blues. Other genres include rock, metal, bluegrass, and funk. While attending both Seminole State College and Rollins College, Allen has served as principal guitarist in many ensemble ranging from jazz combos and big bands, to guitar ensembles and other contemporary groups. As a professional musician Allen has co-lead the Jazz Combo College Confidential who were invited to play the 2013 La Ventana Jazz Festival and other local venues; as a soloist as well. He has also performed with a several choirs as both an instrumentalist and chorister.

He taught beginning guitar classes in the lecture setting for OrangeCounty school systems, and has been part of several musical theater productions. Mr. Koo'ken's educational style is a unique of the Berklee College method of guitar in combination with the Suzuki string method placing emphasis heavily on aural training. He is currently working on his Jazz Fusion album hoping to be released late 2017 to early 2018.