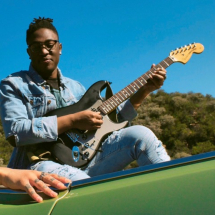 Alireza (Ali) Rezghi is a guitar, ukulele, and voice instructor in the Washington, D.C. area. Passionate and energetic, he is excited to help his students define what music means to them.

Inspired first by his mother -- a jazz singer - and also by his cousins who were active in the hip-hop scene, Ali has been surrounded by music throughout his entire life. At age 6, when his mother gave him his first guitar, Ali recognized music was his destiny. With his mother's guidance, he added vocals to his repertoire shortly thereafter. Ali studied guitar extensively with Mike Sampson during his childhood and teenage years, in addition to continuing his vocal study. As secondary instruments, Ali also learned bass guitar and ukulele.

Ali was first recognized for his vocal talent in high school as he performed with the school's Concert Choir. He was featured as the primary soloist for all performances with both the Concert Choir and the After School Choir. In 2011, he was recognized as Best Male Solo Vocalist at the Williamsburg Concert Chorus Competition, performing with Wise Concert Choir. His love of both voice and guitar is unyielding, and he continues to further hone his craft to this day.

Ali performed in numerous Go-go bands in the D.C. area before forming the metal band "Louder than Quiet" as the lead vocalist and guitarist in 2010. His band has opened for performers such as Erykah Badu and Anderson Paak, and has been invited to perform at Afropunk Atlanta in Summer 2020. In addition, Ali was the first American rapper to secure an international recording contract with Earache Records. Influenced by Sam Cooke, Fall Out Boy, and Parliament Funkadelic, among others, he enjoys exploring new genres and refining his sound.

As a multi-instrumentalist, Ali employs an interdisciplinary approach to teaching. He enjoys teaching a variety of genres to students from elementary ages through adults. He draws from his experience as both an educator and performer to encourage, inspire, and relate to his students. Believing that learning is not a one-size-fits-all pursuit, Ali tailors his approach to match the needs and goals of each individual. He strives to make music fun, and urges his students to reach beyond their comfort zone so they may achieve whatever goal they dream.

Ali hopes to share with his students the love and joy that music has brought to his life. He looks forward to helping them find their own passion and help it ignite!