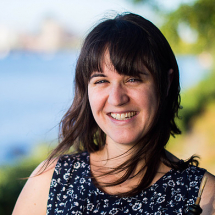 Alicia Maloney is an oboist and teacher who recently relocated to the DC metro area. She formerly held positions with the Claflin Hill Symphony and Boston-based chamber ensemble, Symphony Nova, and has performed with numerous other ensembles, including the Fayetteville Symphony, San Antonio Symphony, Bangor Symphony Orchestra, New Bedford Symphony, and the Vermont Mozart Festival, among others. As a chamber musician, she has appeared in recital series throughout New England and at the Fischoff, Plowman, and Astral Artists Competitions.

Alicia's love for music began long before she started formally studying it. She vividly remembers listening to symphonies in her grandmother's car, dreaming up scenes in her head that correlated with the music that entranced her. She selected the trumpet as her first instrument at age 9, but only lasted a year before she craved the challenge of teaching herself the trombone. Alicia learned her way around the instrument by ear and with the aid of a keyboard her mother gifted her. Her band director later introduced her to the oboe, promising a lifetime of challenge and reward with the unusual instrument.

Alicia went on to study at Boston University, where she earned a Bachelor's Degree in Oboe Performance and Master's Degree in Music Education. In fulfillment of her music education degree, she interned in music departments of several public schools in the Greater Boston region and completed her practicum as an instrumental music teacher in Weston, MA. After one internship in a Pre-K classroom, she was especially excited about the earliest stages of music development and enrolled in music education classes specific to early childhood music. Her work with young children centers on developing audiation, the ability to think and understand in music, and prepares them for future studies, particularly on piano or guitar. She focuses on immersing and engaging the child in a musical environment, encouraging them to listen, interact, and experiment in music. Engraining the fundamentals of the music language then paves the way for a lifetime of music-making .

Alicia has held a private studio since 2007, with students from ages 10-60, beginner to advanced. She recognizes that every student has a unique learning style and personal goals and enjoys customizing her teaching to fit the individual needs of each. She has served on the faculties of several reputable music programs, including the Community Music Center of Boston, the Dana Hall School of Music, Cypress-Fairbanks ISD, Boston University Music Organizations, the Boston Youth Symphony Orchestras, the Escuela Municipal de Bellas Artes (Mexico), and the Bi-National Youth Orchestra of Haiti and the Dominican Republic.

Alicia is available to teach all levels of oboe, beginner clarinet and saxophone, and the Little Music Makers program.