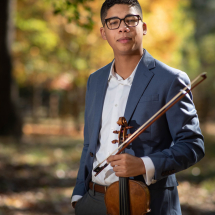 Alexander Marte, a Music Major in his Senior year at Washington Adventist University, has loved music since he was an infant. When he was eight, he began taking lessons with Dr. Linda Whitesitt, a graduate of Peabody Institute with a doctorate in Musicology. Two years later Alexander started performing with the Springs Chamber Ensemble. He continued his studies under Dr. Whitesitt until her retirement in 2013.

In 2009 Marte was the winner of the Montgomery County (MD) Middle School Strings Competition. In 2010 he won the George Rink Memorial Scholarship. He was a recipient of the FAST Scholarship (Forum for Arts, Sciences and Technologies) in the same year. Alexander is the 2013 winner of the Deborah, Leslie, and Christopher Bright Achievement Fund and since has served on their panel as a judge. Marte was chosen by invitation to serve as Concert Master, Berkeley County High School Orchestra for two and a half years until joining the New England Youth Ensemble May 2013.

In 2013, at age 15, Alexander was invited to perform with the New England Youth Ensemble, based in Washington DC. In May of that year Preston Hawes, Director of the NEYE, invited Alexander to join the ensemble as a regular member. He is currently studying under the direction of Dr. Hawes, ARTC, AD, DMA, Washington Adventist University, Assistant Professor, Music, Head of Strings and Orchestral Studies, and New England Symphonic Ensemble, Artistic Director.

Alexander has toured throughout the East Coast, Europe, and in Australia, where, in conjunction with the Ensemble, he was a featured soloist, playing movements from the Mendelssohn Violin Concerto at the historic St. John’s Cathedral in Brisbane, Australia. He has also toured Puerto Rico and extensively in New England. He has played in both the Georgia Dome as well as the Alamodome where he was featured as one of four soloists for Vivaldi Concerto for Four Violins. He is also a part of the Carnegie Scholars program which allows talented young musicians to play at Carnegie Hall along with the professional branch of the orchestra, the New England Symphonic Ensemble, based at Carnegie Hall, New York City.

In early 2019 Alexander was one of 3 invited guest artists to participate in Blackstad In Residence, an international art project set in the beautiful Swedish countryside in the outskirts of the village of Blackstad, Sweden. This project invites Swedish and international artists to come to Blackstad to create inspired work.

Also in 2019, as part of his music studies at Washington Adventist University, Alexander was given the opportunity to participate in a master class with members of the renowned Eroica Trio and in early 2020 he was privileged to be part of a conducting music class with Herbert Blomstedt.

In his spare time, Alexander enjoys playing tennis, soccer, snowboarding, mountain biking, hiking, and kayaking. Alexander is also active in his community, playing his violin as well as sharing the fascinating story behind his instrument.