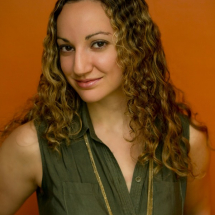 Education:
Alana received a bachelor of science from University of Miami’s Frost School of Music

Alana Dym did not come from a family of musicians, but certainly came from a family of music fans. Music was constantly being played through her house growing up and Alana was there listening, but her ear seemed to focus on the drums. She absolutely loved the way the drums sounded and wanted to create those sounds on her own. Alana started taking private drum lessons at 13 and has been performing in various musical groups since she was 16.

Her love of drumming and percussion led her to the University of Miami's Frost School of Music where she studied classical percussion under international percussionist and composer, Ney Rosauro. She also studied Afro-Cuban hand percussion with first-call studio percussionist and Grammy winner, Richie Bravo, and jazz drum set under accomplished professor and player, John Yarling. While attending the University of Miami, she expanded her studies and received her bachelor's degree in Music Engineering focusing on studio techniques such as recording and mixing audio, circuit design, and wave propagation.

Alana spent many productive years after graduating in Miami working with many bands of varying genres from hip hop to house to indie pop and everything in between. She enjoyed having her playing become a staple in the Miami music community. During her time in Miami, she completed three cross-country tours. She has also played on stage at many major Florida festivals including Bear Creek Music Festival, Virginia Key Grassroots Festival, and one of the leading electronic music festivals in the world, Ultra Music Festival. In 2014, Alana participated in the Hit Like a Girl Contest, and achieved 11th place internationally in the contest for female drummers.

Alana now lives in Denver to pursue more musical goals. She is currently performing with many musical projects around town including Coal Town Reunion, Niek Velvis Blues Band, and WhiteWater Ramble. When not performing, Alana loves teaching students of all ages how to play drums and find their individual sound. In her lessons, she discovers what the student loves most about music and guides them through a step by step process of how to play the music they love the most.