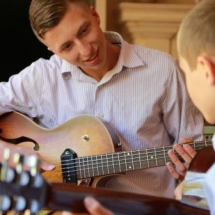 Aidan was born with music in his blood. Born to parents Eric and Nila Alexander, classical music was being played for him even before he was born, as both of his parents are classically trained musicians. They are life-long professional musicians who both received post-graduate musical education in Boston. Aidan began his musical journey around the age of 3, when he was taught piano from his mother. He sang in Mom’s choirs the moment he was old enough, and listened to 10 years of his sister’s Suzuki violin lessons. He continued playing piano, listening to music, and singing until the age of 12, when he received his first guitar.

He couldn’t get enough, and had the musical background and intense practice schedule that caused his playing ability to shoot up very quickly. That year he had advanced enough in his guitar playing to join his teen church band, in which he played for several years. After attending a summer jazz camp, he received a talent scholarship for the guitar, and attended the KSU school of music directly after high school, in which he had graduated with honors and a 4.1 GPA. He immediately became the guitarist for Jazz Band 1 at KSU, directed by Jazz Program Head, Sam Skelton.

Through the past 10 years of focused guitar practice and the 18 years of general musical experience he has accumulated, his abilities in communicating, musicality, music theory and ear training, knowledge of artists and history, and guitar mastery have reached a high point, and continue to grow every day. But, first and foremost Aidan is excellent in passing his skills onto others of all ages, and enjoys teaching with a passion. In his spare time he enjoys writing his own music, learning new instruments, and teaching younger kids how to skateboard at the skate park near his house.