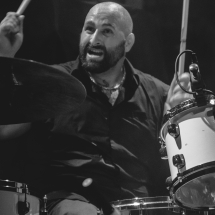 Aaron “The Shredder” Rossi is a Self-Taught, Grammy Nominated Drummer who in his 20 year professional career, has recorded, performed or toured with the best Rock, Heavy Metal, and Punk bands in the World. Additionally, he has taught a Master Class at Musician’s Institute Hollywood, and trained young Drummers to become successful not only on the drum kit, but in the music industry as well.

Aaron started his musical career at the age of 10 playing Saxophone and Guitar in the 4th grade. His parents refused to buy him a drumset, until he was 15 and became 1st Chair Alto Sax in the San Bernardino County Honor Band, and earned a scholarship to Idyllsild Arts where he played in the Symphonic Band and Wind Ensemble. Aaron’s Parents picked him up from music school, and went to buy a new drum set. He started playing immediately. 5 years later he was on his first European tour performing in front of thousands of people. Aaron has gained experience over the years and picked up invaluable tips from drummers, producers, engineers, managers, record label owners, booking agents, technicians and even became a Band Manager himself!!

Aaron recently relocated his Family to Everett, Washington and is excited to share his vast musical knowledge with his unorthodox approach to Teaching Drum Lessons. His philosophy is simple, and goes back to his Junior High School Band Directors saying, “You Gotta Wanna.”