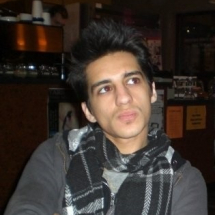 Aaron Bowley is a multi-instrumentalist musician, writer, and producer from the Seattle area. He first began playing clarinet in the 5th grade, quickly excelling and learning classical pieces. Later, Aaron noticed he had an interest and passion for rhythm, so he began to study drums and percussion in high school. There, he played in the competitive marching band, as well as joining a local drum line led by drumming icons Chase Culp and Scott Parker. Aaron also had the opportunity during this time to take private lessons with Michael DeRosier, of HEART fame at the legendary Donn Bennett Drum Studio.

Aaron quickly earned a reputation for playing blazing fast and complex beats, patterns, and rhythms. Often, there would be a small crowd outside Aaron’s drum lessons as him and Michael “traded 4’s” back and forth, pushing each other to play more difficult and musical drum solos. He then began to play with many local bands in high school and performed at school events and private concerts with his bands. He also started another journey of composing music on the piano!

Soon after graduating high school, Aaron began to teach! He taught drum lessons at Moore Brothers Music in Sammamish, WA as well as gaining an interest in electric guitar and eventually teaching that, too. Aaron continued teaching these instruments at the School of Rock Bellevue and Seattle for the next few years.

In the summer of 2010 Aaron toured the country as a drummer with The Scene Aesthetic on the Summer Camp for the Dope Awesome Kids Tour alongside The Ready Set and Forever The Sickest Kids, Phone Calls From Home, and A Cursive Memory. It was during this tour that Aaron gained an interest in electronic music production and began working with software such as Ableton and Pro Tools.

Most recently, Aaron opened his own professional recording studio in Bellevue, WA. He recorded, worked with, and produced various bands/artists such as Fit For Hounds, Hello High Water, End of Expectations, The Sullivans, Hexxus, Emmaus, November Blessing, Mackenzie Thoms, Matt Bekker, and more. He also continues to perform with various bands in the area at many popular venues such as The Showbox in Sodo, El Corazon and The High Dive.

Students can expect to learn in a fun exciting way that combines their interests and natural ability with a tried-and-true method of approaching, understanding, creating, and improvising on their instrument. Technique and musicality are of utmost importance and exploring the fundamentals as well as the more difficult concepts can be both fun and rewarding. Aaron looks forward to working with LIYH because of the great service they provide and care they take and ensuring a quality music education!